Game of Thrones: Who Lives and Dies in the Battle of Winterfell? – IGN

Game of Thrones: Who Lives and Dies in the Battle of Winterfell? – IGN

As if Endgame wasn’t stressful enough.

Update: For those following along with the new episode, we’re updating this article as major characters perish. Beware of major spoilers below!

If you aren’t already traumatized from finally finding out who lives and dies in Avengers: Endgame this weekend, the Night King is ready to twist the knife that Thanos previously plunged into our collective hearts, as Game of Thrones prepares for an episode that should be no less devastating (if slightly smaller scale) than the Avengers’ final stand.

We’ve already heard that the so-called “Battle of Winterfell” will be the longest consecutive battle sequence ever committed to film, and that “this final face-off between the Army of the Dead and the army of the living is completely unprecedented and relentless,” according to producer Bryan Cogman. Maisie Williams said that the process of filming the Battle of Winterfell left her “broken as a human,” while Iain Glen called it “the most unpleasant experience I’ve had on Thrones.” So naturally, we know it’s going to be awesome.

But there’s a fairly good chance that a lot of our favorites are going to die in this “final face-off,” so we polled IGN’s staff for their predictions on who’s going to make it out of this showdown alive, and who we think is definitely going to die in the Battle of Winterfell. First, refresh your memory with the major players we know are taking part in the battle in the slideshow below, then read on for our predictions. 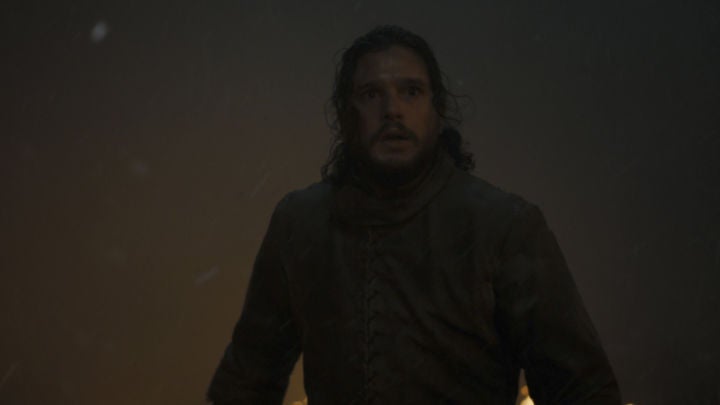 The true heir to the Iron Throne will have a lot more to deal with than his lineage in the coming battle, and we suspect he’ll survive long enough to finish that awkward conversation with his aunt-lover Daenerys once the snow settles. 88.2% of IGN’s staffers think he’ll make it through the Battle of Winterfell alive.

The Mother of Dragons may have to go up against her fallen son Viserion if the Night King comes calling, but that bombshell Jon just dropped on her will probably be weighing heavily too. 82.4% of us think she’ll survive the coming battle.

The Lady of Winterfell looks like she’s up on the battlements here alongside her sister rather than hiding in the crypts, and we can certainly count on Arya to protect her, provided they can stay together…82.4% of IGN’s team voted that she’ll stay alive through the carnage.

A girl has said “not today” to the God of Death many times before, but she clearly thought her untimely demise was a possibility when she finally acted on her desires for Gendry in episode 2. Armed with his new weapon and the tricks of the Faceless Men, we’re hoping her many years of training are put to good use here. Like her sister, 82.4% of IGN’s voters think the scrappy Stark is safe.

The Spider looks set to take refuge in the Crypts of Winterfell during the battle, but considering the White Walkers are able to reanimate the dead, that may not be the safest place to hide. The odds seem just about in Varys’ favor, with 58.8% of us thinking he’ll live to whisper another day.

As Hand of the Queen, Daenerys has insisted that Tyrion needs to be protected despite his desire to stand with the rest of the fighters during the battle. Will it be enough to keep him safe? 75.6% of us think so.

This Night’s Watch stalwart has survived plenty of battles alongside Jon Snow before, but has his luck run out? Sadly, we think so -100% of responders think Edd is dead.

You may have forgotten his name but “Bronze Yohn” is a respected bannerman of House Arryn with plenty of battle experience, but as a minor character 100% of us would be surprised if he makes it out alive.

Former Hand to Stannis Baratheon and chief advisor to Jon Snow, the Onion Knight has survived his share of battles more through luck than judgment, but we’d be heartbroken to lose him. IGN’s staffers are pretty split on his survival odds, but 52.9% think he’ll squeak through alive.

She’ll be stashed away in the Crypts of Winterfell with Little Sam and the other women and children, but that strategy might backfire. Still, 70.6% of us think she and little Sam will live.

The formerly arrogant Kingslayer has redeemed himself, knighting Brienne of Tarth and pledging to fight under her command at the Battle of Winterfell. Such a heroic turn makes us worry that Jaime’s about to go out in a blaze of glory, but 52.9% of us think he’ll survive.

The Three-Eyed Raven plans to use himself as bait to lure the Night King in, but there are a lot of ways that his plan might go wrong. 58.8% of us think Bran will die in the Battle of Winterfell.

The Lord of Light has resurrected this warrior six times, but without the red priest Thoros of Myr, if he falls in the Battle of Winterfell, there will be no seventh return. 94.1% of us think his time is up.

This newly-knighted badass is one of the most skilled fighters on the show but she’s also going to be in the thick of the battle. Here’s hoping the show didn’t give her that moment of connection with Jaime just to kill her off. 58.8% of us think she’ll live to keep her oath another day.

Daenerys’ loyal servant (and perennial admirer) has had a hard road to get this far, and his overdue chat with his cousin Lyanna makes it seem like his time might finally be up, but he did get a fancy new Valyrian steel sword from Sam Tarly that should give him a fighting chance against the White Walkers. 81.3% of IGN staffers think he’s going to bite the dust.

The ass-kicking Lady of Bear Island isn’t about to cower in the crypts with the other women and children, so we hope she’s tiny enough to dodge all of the White Walkers’ attacks. Luckily, 75% of us think she’s sticking around.

Theon has made plenty of mistakes when it comes to Winterfell, and hopes to redeem himself by protecting Bran from the Night King alongside the other Ironborn, which means he might be perfectly positioned to make the final sacrifice in the hope of atoning for his misdeeds. 64.7% of us think he’ll die while defending Bran.

Here’s hoping all that giant’s milk will keep this gigantic ginger Wildling safe enough to continue obliviously flirting with Brienne for a few more episodes. 76.5% of IGNers think he’ll die in the Battle of Winterfell.

After serenading us with a haunting and perhaps prophetic song in episode 2, Brienne’s squire will finally get to put his training to the test in the Battle of Winterfell. 64.7% of us think it won’t be enough to get him out alive.

Surely Sandor Clegane has to survive long enough to face off with his brother, The Mountain, and give us Cleganebowl? Still, there’s an awful lot of fire in the teasers for the Battle of Winterfell… 58.8% of us think his luck will hold so we can get the showdown we’ve been waiting for.

Robert Baratheon’s bastard finally consummated his flirtation with Arya, and he’s been hard at work building dragonglass weapons for the battle – but will he live long enough for his true lineage to come in handy? 52.9% of us think he’ll fall without reaching the end of the series.

Her relationship with Grey Worm is one of the few good, pure things in this show, which makes us worried the writers will rip it away from us. But we’re rooting for these crazy kids. 52.9% think she’ll survive.

This loyal soldier is ready to lead the Unsullied and the rest of Dany’s army to war against the Night King and his army of the undead, but since he’s on the front lines, we just hope he makes it back to Missandei. Unfortunately our staffers aren’t as optimistic about his chances as they are about Missandei’s – 76.5% think he’ll die in the fight.

If some fan theories are to be believed, Sam might be narrating this whole story (and as he pointed out in episode 2, he’s survived a surprising amount of battles so far, one way or another) so we think he’s pretty safe. Or 52.9% of us do, anyway.

Jon’s faithful direwolf has been MIA for most of the past two seasons but he made an appearance with Jon, Sam, and Edd in episode 2, hinting that he should have a part to play in the battle. We’re just hoping the show isn’t bringing him back after all this time just to kill him – but 56.3% of us worry that’s exactly what’s going to happen.

Daenerys’ remaining dragons are the living’s best defense against the Night King, and hopefully two against one will keep the odds stacked against Viserion. 70.6% of us think Drogon will survive, while Rhaegal’s odds are slightly worse with 58.8% of votes saying he’ll live.

Melisandre is a surprise addition to this list, as there was no indication beforehand she’d even be joining the Battle of Winterfell. But join she did, becoming the very last person to die as a new day dawned over Winterfell.

Who do you think will die in the Battle of Winterfell, and who are you convinced will be safe? Share your predictions in the comments, and join us for IGN’s live pre- and post-episode Game of Thrones Watch Party at 5:30 p.m. PT/8:30 p.m. ET.